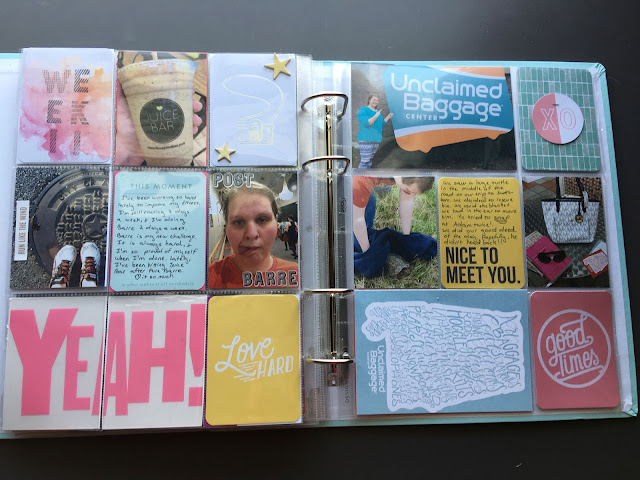 I can't believe that it is already Spring. I know people say it all the time, but where is 2016 going? I just don't know! But anyway,  I'm a fan of the yellow, pink, and light blues I'm utilizing in this layout! 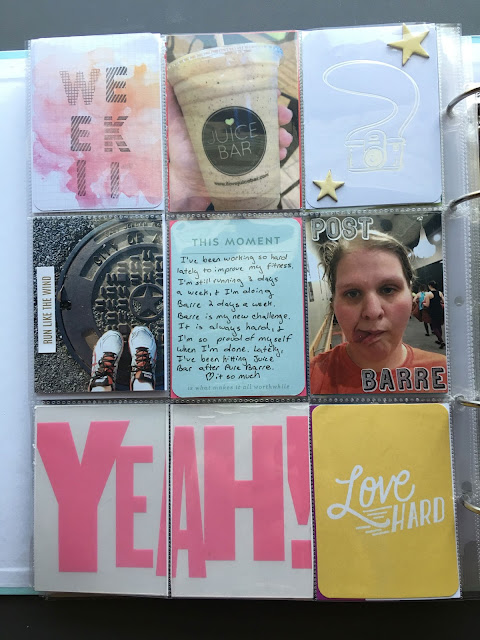 This side is mostly about my commitment to working out lately. I have my ugly post-barre sweaty face, my running shoes, and my new fave place in Madison, Juice Bar.  And I stamped "week 11" using a stamp set from Kelly Purkey. 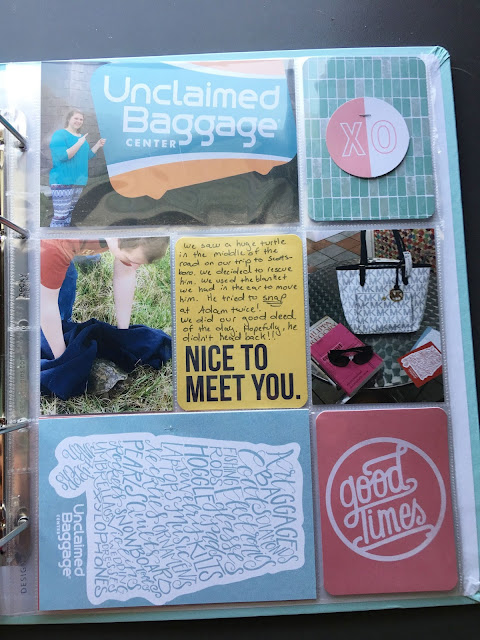 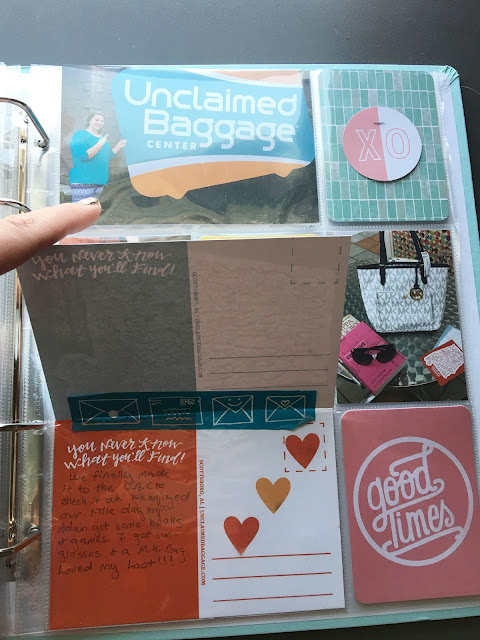 This side explores our trip to the Unclaimed Baggage Center. While at the center, I purchased 2 post cards. Using some washi tape, I created a flip card. I wrote about our day there. 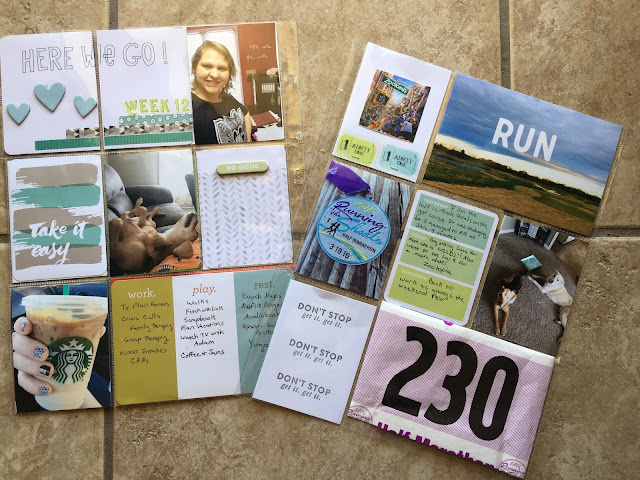 I created this layout from "scratch." I just mean I didn't use any pre-packaged or coordinating kit. I just went through my stash and pulled together some things I liked. Mostly in the green and blue color wheel. 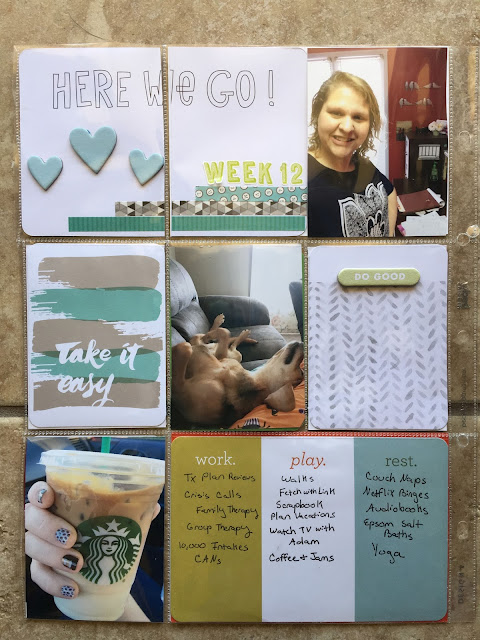 This side has an adorale picture of Linky, a work place selfie, and a picture of me with my coffee + coffee jams.I used the work, play, and rest card to document what those domains of my life look like right now. 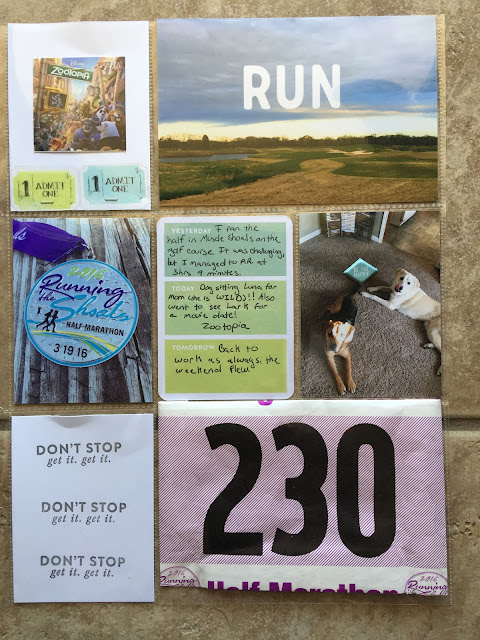 This side mostly focuses on my recent half-marathon (plus the picture of Link/Luna and a screen capture of Zootopia). I did the "run" heading by using a digital alpha set. I also created the card in the bottom left corner, using card stock and a stamp (duh). And the number is my actual race bib, trimmed down.

Click here to follow this blog on bloglovin and keep up with all my posts!
Posted by B at 11:02 PM No comments: Links to this post 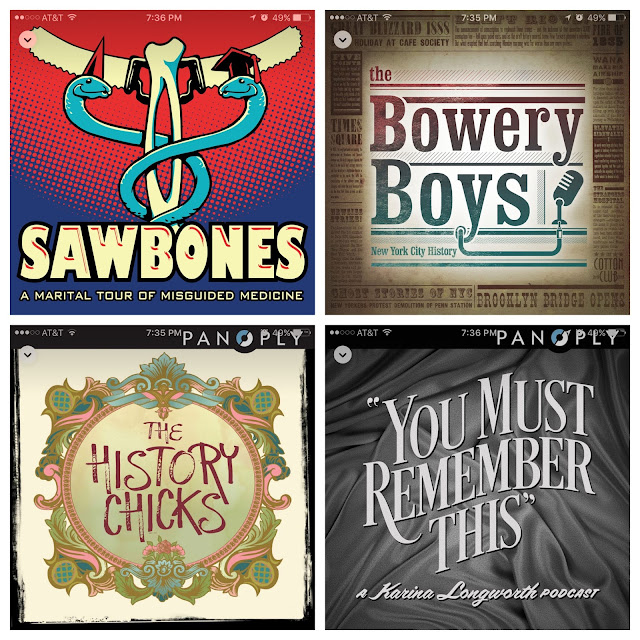 History has been a  passion of mine for as long as I can remember. Especially English history (to get more specific Tudor era history). So it is natural that I would gravitate toward History themed podcasts.   These are a few of my favorites:

This show is so humorous, it is done by a couple (the wife is a Doctor), and it is all about Medical History. They cover illnesses/surgeries/historical figures. Plus the wacky theories people used to have about their causes and the remedies that were used throughout history. Funny, almost every time.

Such a great podcast that is focused on the history of New York City. The hosts of the podcast do such a good job, and I just love listening to their voices. This is a perfect podcast if you love New York City or American History.

Suggested Episodes: The Big History of Little Italy and The Great Fire of 1776

This is a once a month podcast (which nearly kills me, when there is a two parter), focused on famous women in history. The hosts are really laid back, somewhat humorous, and I always love the details I learn, even about subjects I already know a lot about!

4. You Must Remember This

This podcast is all about Hollywood History. It is about classic movie stars and events, and how they effected the movies we know and love today. She does independent episodes, but has lately been doing series of episodes following one subject in depth. Oh, and her voice is spectacular!

Click here to follow this blog on bloglovin and keep up with all my posts!
Posted by B at 9:18 PM No comments: Links to this post 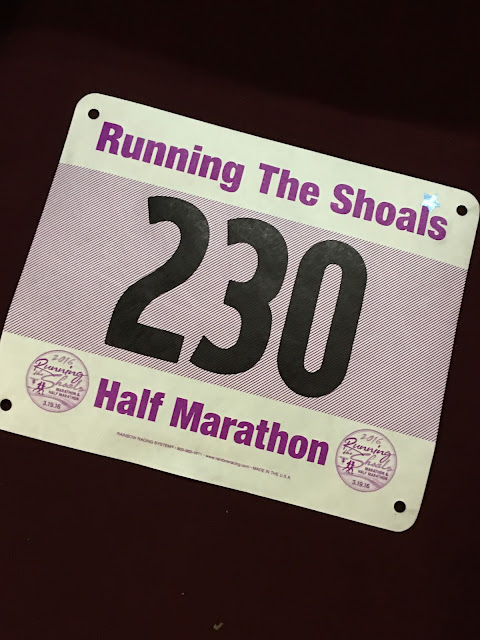 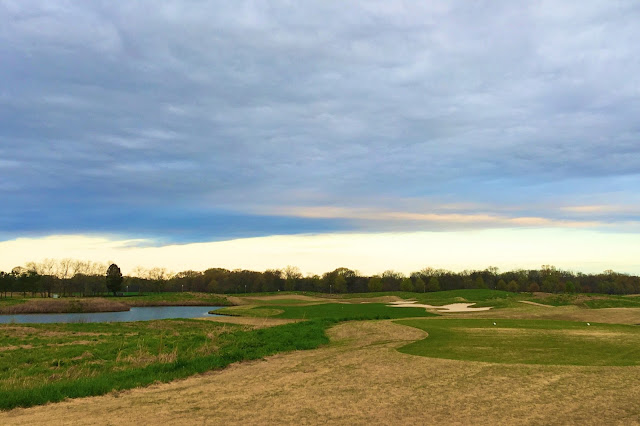 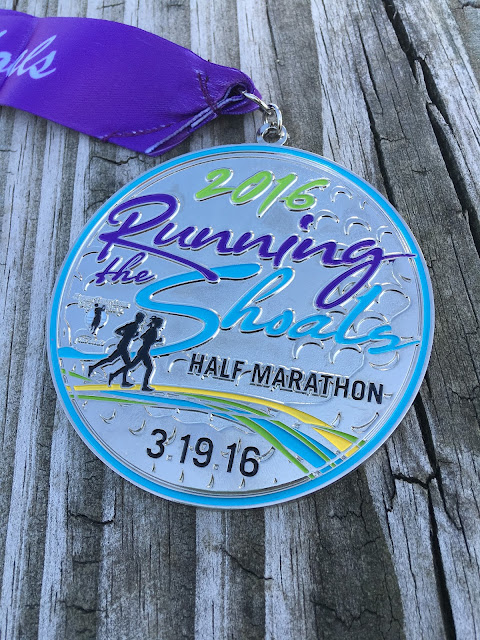 My goal was to run a half-marathon 1x a month for one year. In January, I did the full marathon, but I missed last month due to a sinus infection. So I'm just going to make sure I do 12 this year. But for March, I had picked out the Running the Shoals Half in Muscle Shoals. It is about an hour from me, so I had to get up at 4:30 a.m. on a Saturday.

The race was on a golf course, and a very hilly one at that. I had learned a long time ago that I do better walking up hills than running up them. Much faster for me that way, so I might have looked like the hunch back of Notre Dame ascending those hills, but I got it done!

As always I managed (according to my GPS app) to go 14.5 miles during the race. But I've finally learned why from reading this. But I managed to PR on this race, doing the half in 3 hours 9 minutes! Even with all those hills, I was excited. Now I have to work on not running extra miles during these races.

Half-marathons have quickly become my favorite race distance. They are challenging, without seeming overwhelming, and they are typically done by mid-day! So you have the rest of the day to do other weekend activities.

In fact, after my race, I came home and took a nap, before meeting a friend at the movies. A great Saturday overall!

Click here to follow this blog on bloglovin and keep up with all my posts!
Posted by B at 8:30 PM No comments: Links to this post 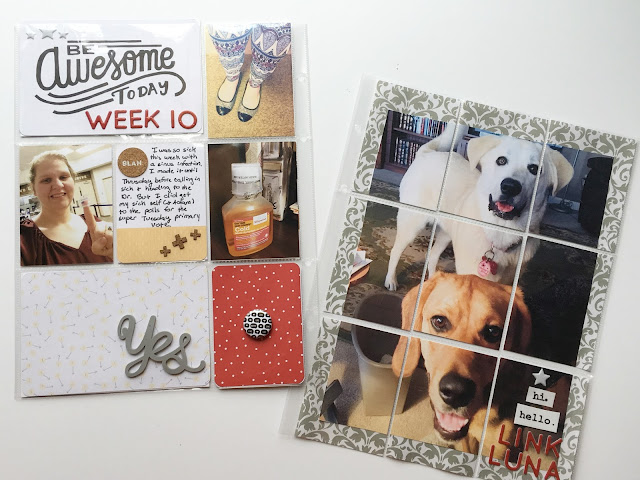 I'm really loving the simplicity of  my week 10 spread. I don't have a lot of photos, but I feel like the whole design works well together. I recently learned the concept of visual triangles, and I'm trying to use those more. 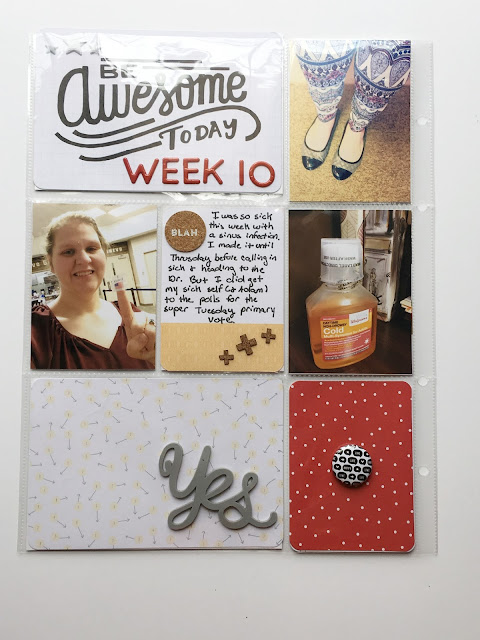 During that week, I was laid out with a sinus infection. I struggled throughout the whole week before giving in and calling in sick on Thursday to go the doctor. While I was at work that week, I drank dayquil like it was an expensive bottle of wine.  But we did manage to get out of the house to vote on Super Tuesday, so I included a picture of that! 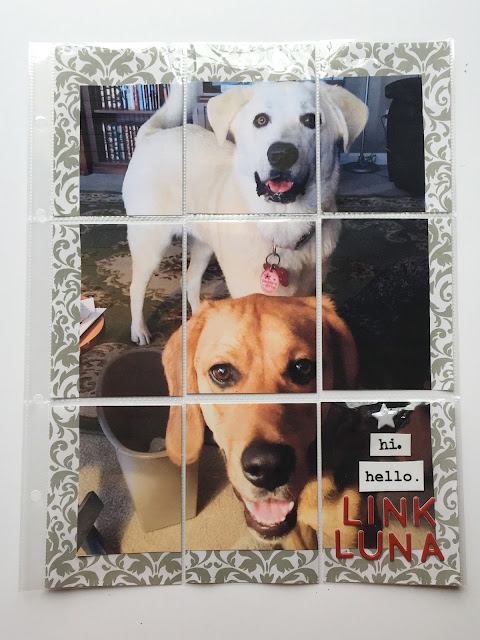 Link and my mother's dog Luna have been playing a lot together lately. They are pretty close in age, and play so well together. Their budding friendship is so fun to watch. I decided to blow up this cute picture, stick it on some scrap booking paper, and embellished the corner a little. 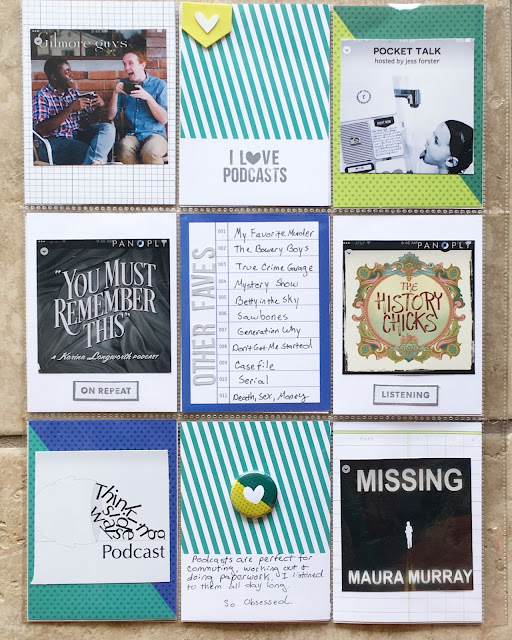 I recently lost my mind and am now subscribed to two project life monthly subscription services (Studio Calico/Kelly Purkey). I saw Kelly Purkey's upcoming Playlist Kit, and I was in love. I decided to use it add an insert about all the podcasts I'm loving and listening to right now.

Click here to follow this blog on bloglovin and keep up with all my posts!
Posted by B at 12:00 AM No comments: Links to this post 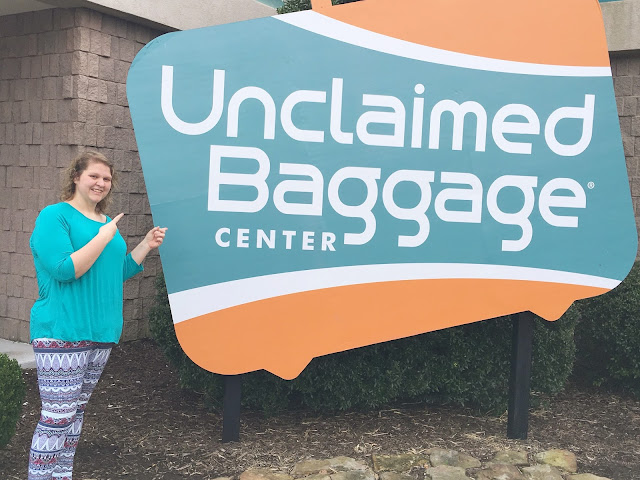 Yesterday, Adam and I took a little day trip to Scottsboro, Alabama, to check out the Unclaimed Baggage Center. Which is basically a thrift store where all the items in luggage that gets lost when people fly (and never reunited with their owner) go. I've been wanting to check it out for years and years, but every time we were in the vicinity, it was closed. 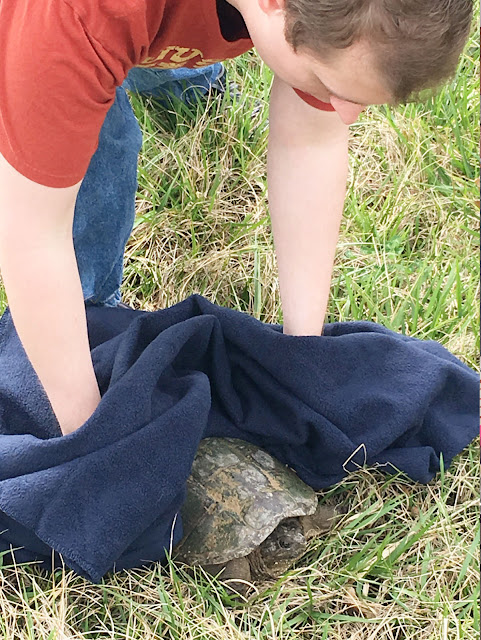 When we had almost completed our hour drive, we tried to avoid what we thought was a tire in the road, but it ended up being a turtle. The biggest turtle I've seen outside of the zoo. We couldn't leave it in the middle of the road, on a somewhat busy highway. Those trucks were going to turn him into turtle soup. We quickly completed a U-turn, so we could get him out of the road.

I was worried he might be a snapping turtle (later by googling online, I learned he WAS a snapping turtle). So our best idea was to wrap him in a blanket we keep in the car for emergencies. He let Adam move him to the field next to the highway without issue. But when we attempted to move him farther back, he tried to snap off Adam's finger. It was like he was saying, "I got this now, leave me alone." We left him to his own devices, hopefully he didn't head back to the road! 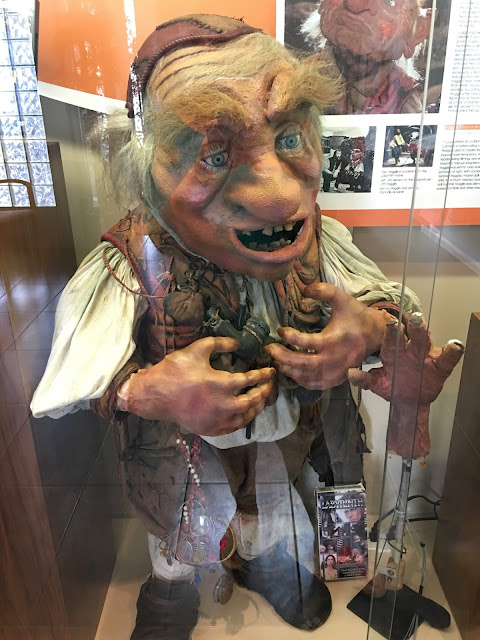 The UBC has a little museum of some of the most unusual items they have come across. There were huge paddle boards, McDonald's Arches, and Hoggle from the movie Labyrinth! Like how does that get lost? 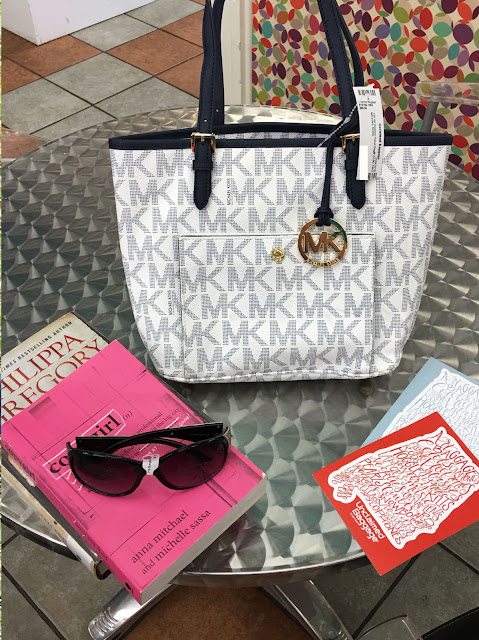 Unclaimed Baggage is huge (about the size of a city block). And they have so much stuff, it really is like going on a Treasure Hunt. Ultimately, I got some books. sunglasses, postcards (for my project life album), and a Michael Kors bag for a very reduced price! Adam got some video games and books for himself.

Such a fun place that would be good to hit up every couple of months to see what could be found!

Click here to follow this blog on bloglovin and keep up with all my posts!
Posted by B at 11:31 AM No comments: Links to this post 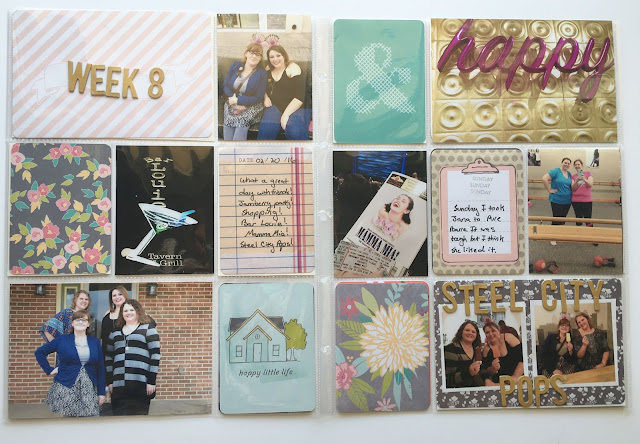 Week 8 was the weekend my friends came to visit. I have been sick over the last two weeks, so I kept it simple, just using one of my project life core kits. I didn't embellish much, other than using the Alpha to write Steel City Pops and Week 8! 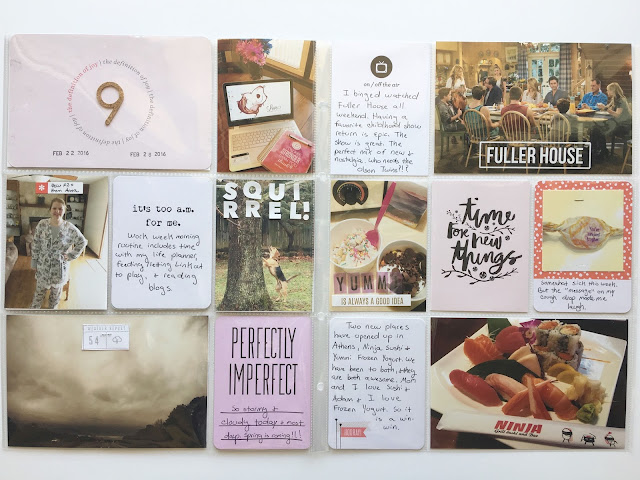 Week 9 was just a simple, typical kind of week. I didn't use a kit, I just pulled out some cards that I thought would look good together and got to work. I'll be honest, it is not my favorite layout, but I don't dislike it. It is growing on me. 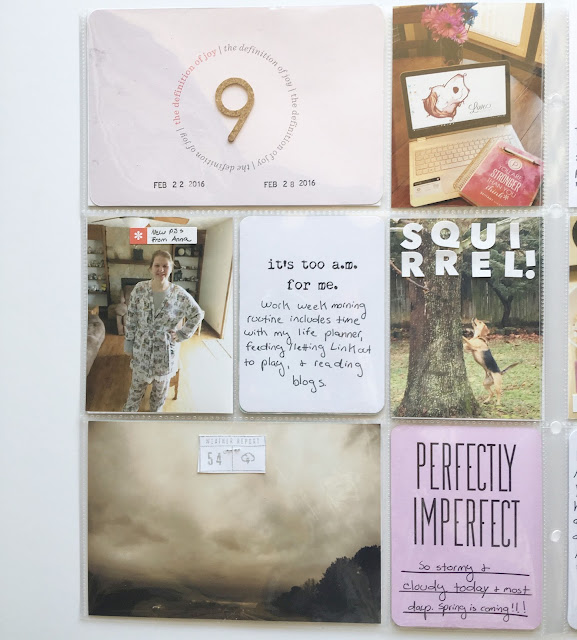 I was inspired to document my morning routine by the "it's too a.m. for me" card. Many mornings, I pull out my planner and browse the internet. I feed and let out Link (sometimes he chases squirrels). And I used a picture of a cloudy morning commute. 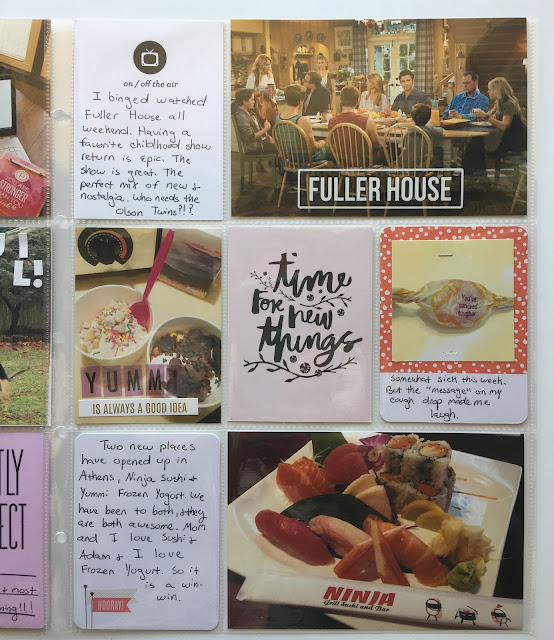 This side was more of the weekend. I binged watched Fuller House (so good), and we tried out two new restaurants in our hometown (Yummi yogurt and Ninja Sushi). I also took a picture of my cough drop because it had a motivational message (You've Survived Tougher) on it, and that made my laugh.

Click here to follow this blog on bloglovin and keep up with all my posts!
Posted by B at 8:51 AM No comments: Links to this post 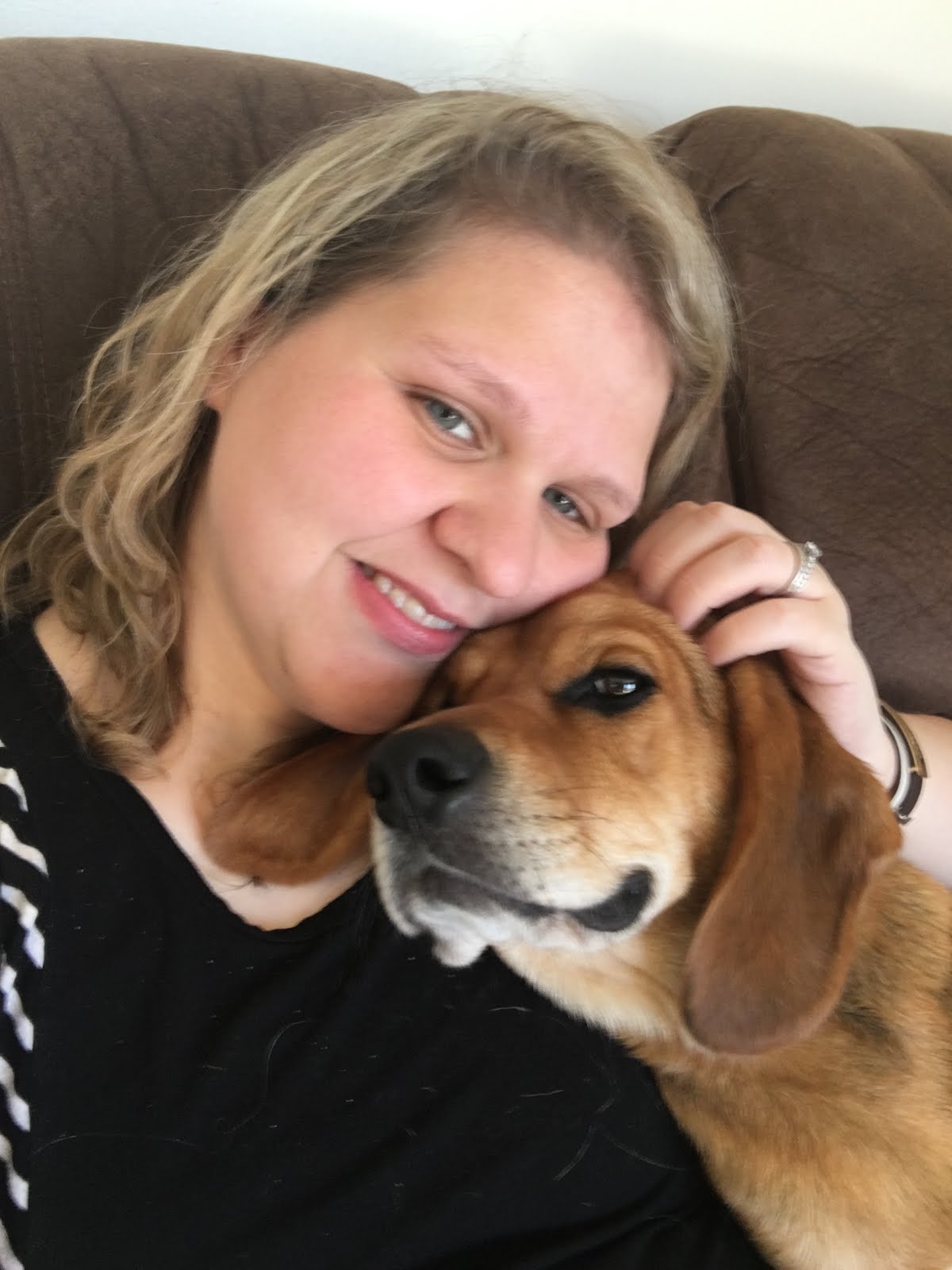 Hi. I'm Brittany. A 30 something lady living, loving, and working for the weekend in North Alabama.